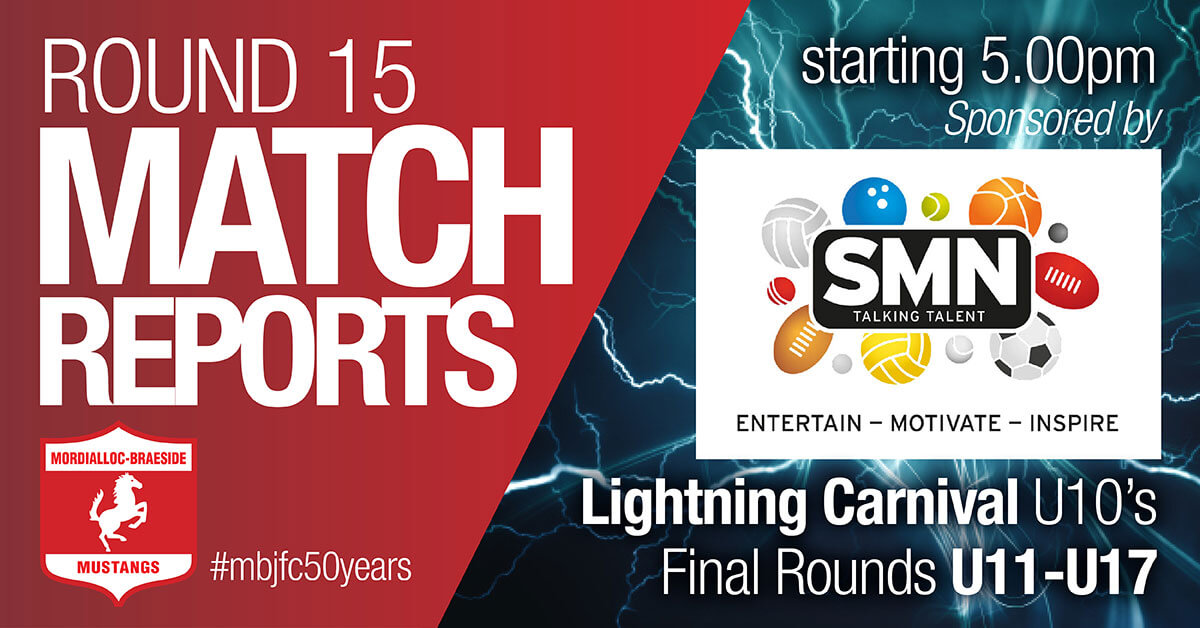 A big weekend of football ahead with the last of the home & away season for our U11 – U17s and the Lightning Carnival for our U10 teams. Our best wishes to everyone for their games this weekend.

Match Reports this coming Sunday will start at 5pm, and will include a mix of different age groups. Those teams presenting on Sunday night are listed below (but not necessarily in this order on Sunday):

Most of these teams are teams that have milestones to celebrate, or are finishing their season and we encourage everyone to come down to the clubrooms to support them. There are three teams included in the list above (indicated by the *) whose ladder position won’t be finalised until after their game on Sunday and who don’t have milestones to celebrate, but we’d love to hear from them as well on Sunday!

This week’s match reports set up team is U10 Bronze (Murray). Could families in this team please head down there at 4.30pm for setting up and remember your team needs to assist in the canteen for the first half.

This week’s match reports pack up team is U10 Yellow (Harper). Could families in this team please hang around at the end to assist in the clean up and remember your team needs to assist in the canteen for the second half.

This weekend’s match report is brought to us by SMN Talking Talent. The team at SMN are a big supporter of Mordi-Brae JFC, and we’d like to extend a big thank you to them for all that they have done, and continue to do, for the club. You can find out more about SMN Talking Talent by clicking here.

We have some fantastic milestones to celebrate on Sunday night and we encourage all of our families to congratulate these players.

Congratulations on playing 50 games with MBJFC:

Congratulations on playing 100 games with MBJFC:

Congratulations on playing 150 games with MBJFC:

Tickets are still on sale for next Tuesday’s Sportsmans Night starting at 6.30pm with Jonathan Brown (Brisbane Lion champion) and MC’d by Matt Cox of Buxton Real Estate Mentone. To get your tickets, go to https://www.trybooking.com/WZTM

Best of luck to everyone for a fantastic weekend of football – kicking off with a game on Friday night at Walter Galt Oval 1 for our U13 Div 5 (Peck) team. If you don’t have plans, come down and cheer them on! The U16 Girls teams will be hosting a BBQ and running a raffle so remember to bring some coins with you. Have Fun!