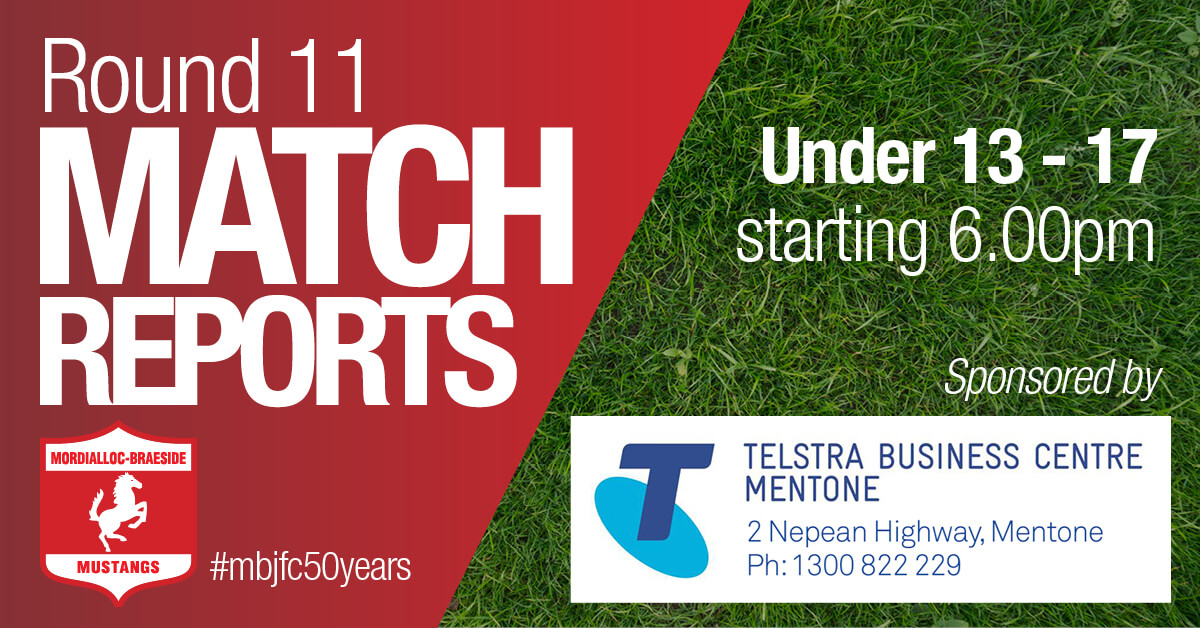 This Sunday’s Round 11 match reports will start at 6pm at the club rooms and will feature the teams in the U13 – U17 age groups and we encourage all Mordi-Brae families to come down and support those teams and hear how their Round 11 games went.

Sunday’s match reports are brought to us by Telstra Business Centre Mentone.The team at Telstra Business Centre Mentone are a fantastic supporter, and sponsor, of Mordi-Brae JFC and we’d like to extend our warmest thanks to the team for all that they have done and continue to do, for the club. To find out more, Click Here. Give them a call today to see what they can do for you!

Our U17 Boys team will be running a lolly jar competition where you purchase a ticket to guess the number of lollies in a jar. Closest to the total amount wins the jar of lollies! They started it at the last round of match reports, and the winner will be announced this Sunday night at the end of match reports so our U13 – U17s get to join in as well in the competition!

This week’s match reports set up team U14 Girls Div 1 (Barrow). Could families in this team please come down to the rooms by 5.30pm to assist in the setup, and let Fred, your Team Manager, know if you can assist in the canteen during the first half of match reports.

This week’s match reports pack up team isU16 Div 2 (Kelly). Could families in this team please stay at the end of the night to assist in packing up, and let Bec or Karen, your Team Managers, know if you can assist in the canteen during the second half of match reports.

We have some milestones to celebrate this coming weekend too! For those who reached a milestone in Round 11 in the U8 – U12 age groups, your presentation will be carried over to the next match report for your age group. This way all of your teammates and age group coaches and team officials can be there to help you celebrate.

Congratulations on playing 50 games with MBJFC:

Congratulations on playing 100 games with MBJFC:

At the end of match reports, there will be a pizza night for our U13 Boys teams and we hope to see as many of their families at the rooms on Sunday night. All U13 families will need to pitch in to ensure the pizza night runs well and is cleaned up afterwards.

Sunday 22nd July is our Club’s photo day, and by now your Team Manager should’ve provided you with a guide as to what time to arrive at the club rooms. Please note that there may be some changes to times, and any changes will be communicated as soon as we can. If you haven’t heard anything about it, please speak to your Team Manager.